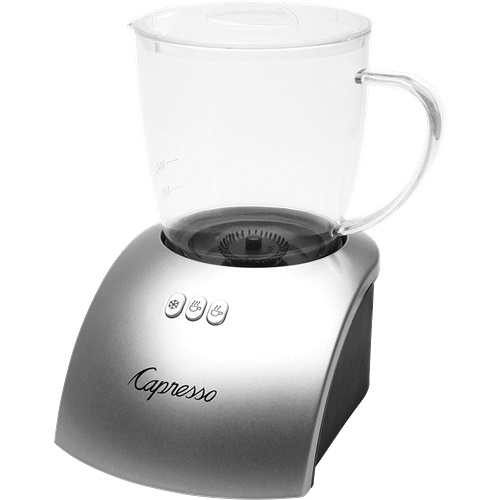 It’s the 12 Days of Christmas Giveaways! On the 7th day of Christmas, there was a Capresso froth PLUS.

The froth PLUS heats and froths milk perfectly for cappuccinos and lattes. And just when you think your favorite cup of hot cocoa can’t get any better, try pouring foamy milk from the Capresso into your mug. The hot milk melts the chocolate (or nutella!) and then stir in a shot of Bailey’s and spoon the rest of the foam on top.

You’ll feel like you just shelled out $5 for homemade holiday cheer. (Red cup and friendly barrista not included.)

And we have one for you, courtesy of Capresso!

To enter the giveaway, simply answer the following question in the comments below: What is your favorite warm or hot drink during the holidays? (It’s the only way I could phrase the question so I couldn’t answer “margarita.”)

Update: The random generator thingy has spoken: Chung-Ah with comment #411 is the winner! Please check your email for instructions on claiming your prize. The elves are waiting!

(Extra entries can only be counted if left as a separate comment – your comment # is your entry.)

The fine print:
– Maximum of six (6) entries per person.
– Giveaway ends at 12:01am (Texas time!) on December 13th.
– Winner will be selected by one of those cold, soulless, unfeeling random number generator thingies and announced on this post after selected.
– Winners will receive a Capresso froth PLUS directly from Capresso (maximum retail value of prize = $60).
– Prize must be claimed within 7 days or it will be forfeited.
– Winning “extra entry” comments can be subject to verification.
– Prize can only be shipped to a US address.
– This prize has been provided by Capresso.
– Official giveaway rules can be found here.