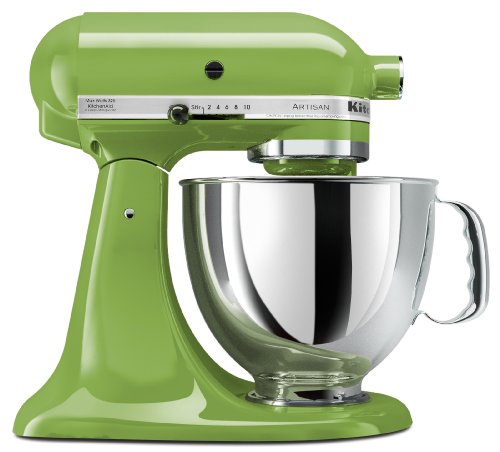 I’m on a temporary carb hiatus which means I’m frequently grouchy as all hell. But, I’M NOT IN JAIL – something that might not be so far off after a carb junkie like me dropped sugar and flour and bread and pizza crust and everything else that’s awesome and crunchy.

However, in those few (and thankfully getting farther between) moments where I don’t feel like I could punch a baby for some of HEBs Multigrain Pita Chips (see what I mean?), I actually do feel pretty good.

Like really good. And a homemade skinny margarita (ahem, or you know… two… ish) is perfectly within acceptable limits 🙂

BUT, that means that everything that I could possibly load up with disgusting amounts of green food coloring to “celebrate” St. Patrick’s Day in the most American way possible… pretty much off limits right now.

Thank the heavens that guacamole is not off limits. Because I might actually punch someone.

But speaking of being lucky, someone will get a shiny new KitchenAid Artisan stand mixer of their very own. To enter, simply leave a comment below telling me what your favorite green food or drink is!

Update: And the winner is Lisa with comment #654 whose favorite green food is Spinach Pesto. Solid choice!

You can earn up to two bonus entries by:
– Tweeting about the giveaway and leave the link to your tweet as a separate comment in the comments below.
– Leaving a separate comment that you follow Confections of a Foodie Bride on Pinterest.

The fine print:
– Maximum of three (3) entries per email address.
– Giveaway ends at 12:01am (Texas time!) on March 22nd.
– Winner will be selected by one of those cold, soulless, unfeeling random number generator thingies and announced on this post after selected.
– Winners will receive KitchenAid 5-Quart Artisan Stand Mixer (maximum retail value of prize = $349; color choice subject to availability from provider’s selected supplier).
– Prize must be claimed within 7 days or it will be forfeited.
– Prize can only be shipped to a US address.
– All prizes are provided by Confections of a Foodie Bride, unless stated otherwise.
– Official giveaway rules can be found here.