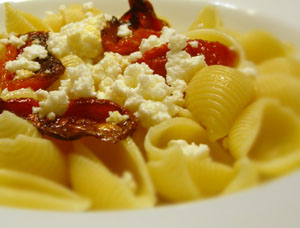 It’s official – as of dinner tonight, I have run out of homemade ricotta cheese. I lived off of it for a week – it was quite the multi-tasker appearing in dessert, snacks, ravioli, salads, and pastas. I think the most simple dishes were my favorite – eating ricotta drizzled only with a bit of honey and dusted with unsweetened cocoa powder or tossed into a bowl of pasta with only some homemade sun-dried tomatoes.

Today’s sauce of the day was the latter of those favorite dishes – a pasta toss with ricotta and sun-dried tomatoes. There really isn’t even a recipe. I took some homemade sun-dried tomatoes that I had packed in olive oil, a handful of ricotta cheese, and a single serving of pasta shells and tossed ’em together. The oil from the tomatoes was sufficient to coat everything beautifully. A couple grinds of black pepper later, and you’re set!