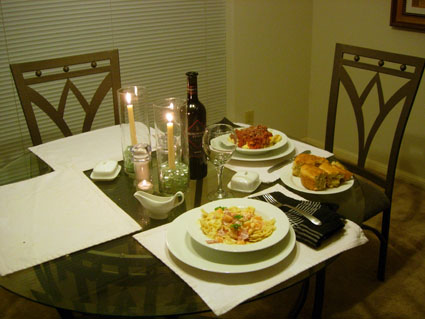 I like weird things. I should elaborate: I like flavor and texture combinations that might be labeled as “weird” by an unadventurous eater. My favorite breakfast is chocolate gravy on scrambled eggs and sausage. I enjoy an occasional crunchy PB & J where the J = jalapeÃƒÂ±o. I like cayenne pepper in my cocoa, smoky grilled peaches and plums on top of vanilla ice cream, and I could really go for my infamous nacho-cheese-Dorito-avocado-and-raspberry-vinaigrette sandwich right now. Weird.

Since it was our first married Valentine’s Day, I thought I’d whip up Jason’s favorite meat sauce. Cheese tortellini, meat sauce, and rosemary bread – a winning and very unweird combo in Jason’s book and normally in mine, too, but that nagging voice inside my head kept trying to convince me to eat the cantelope I had leftover from lunch.

We celebrated Valentine’s Day over candlelight and dueling entrees: Jason enjoyed his Tortellini with Meat Sauce and I plowed through my farfalle with Prosciutto-Melon Cream Sauce. Surprisingly, it paired really well with the Australian Shiraz we were also enjoying – Valentine’s Day on a Wednesday… what a great excuse to drink on a school night! The most exciting part wasn’t coming up with some weird (I prefer “unique”) pasta sauce recipe, it was the shining response I got from my curious husband when he stole a bite: “Wow, that isn’t half bad.” A true compliment from an unadventurous eater.