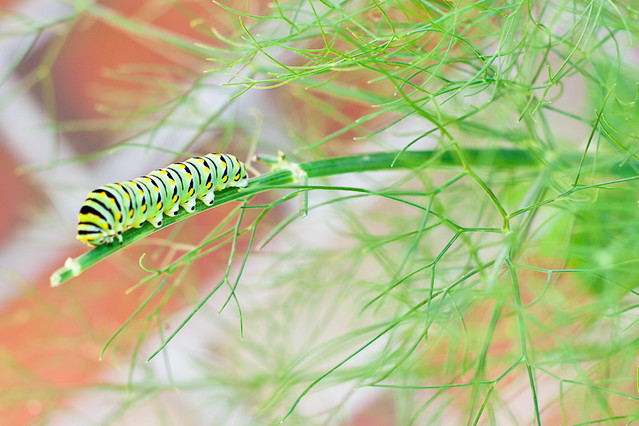 Did I ever tell you about that time I was picking a half-million serrano peppers a few summers ago and I’d spied a reddish-brown “pepper” (airquote spoiler!) that had fallen off the bush, got caught on the vertical support net, and was hanging there… “drying.” I pulled it off the net but before I could toss it over in the general direction of the compost bin, it wiggled in my hand .

I then proceeded to totally and completely and entirely lose my shit. (And then I hurled over the brick fence and it probably landed in the street thereby ending the circle of life.)

The “pepper” wasn’t a pepper at all. It was a cocoon… or maybe a chrysalis. For what Google Images told me might have been a hawk moth. Or not. 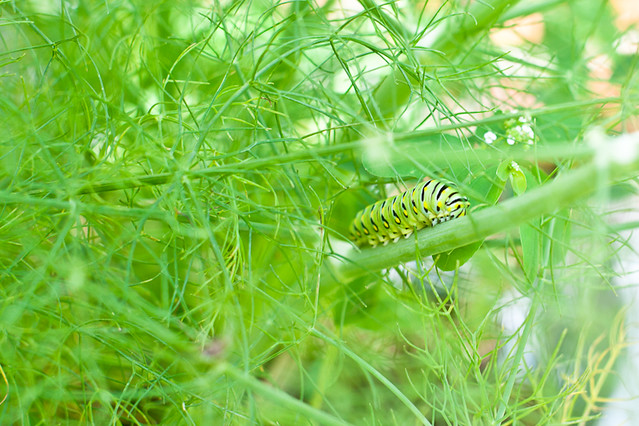 While moths [gag] and wiggly “peppers” [triple gag] freak me the heck out, I have no problems surgically removing and destroying vine borers or walking with Landry through the Cockrell Butterfly Center at HMNS.

On the contrary, she and I always wear red in hopes that one will land on our shoulders. And when that doesn’t work, we accept the consolation prize of watching them mate on the sidewalk for an aaaaawwwwkwardly long time.

I headed to the garden this morning to pull a fennel bulb for some fennel salsa verde and found 6 black swallowtail (I think) butterfly caterpillars happily munching on the fennel fronds. The seedlings I started this spring to attract monarchs didn’t survive transplanting but it looks like someone else still managed to find a home.