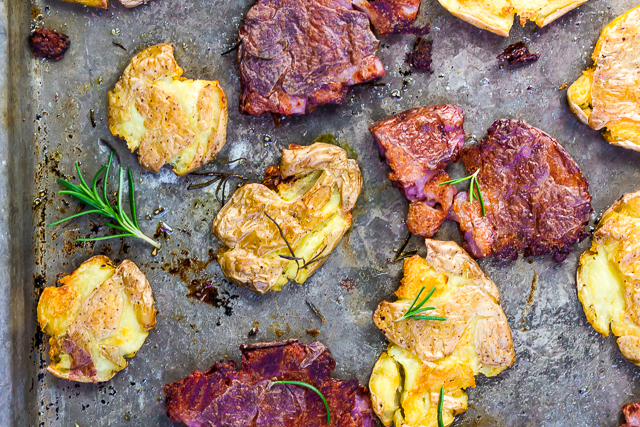 We don’t eat a lot of white potatoes around here. I can count on one hand the number of times I’ve made mashed potatoes as an adult. And when it came time to make them during the holidays, I actually had to get pointers from a friend.

So when a photo of these tiny smashed, crispy potatoes popped up in my Facebook feed a couple of weeks ago, I thought, “Why the &^$# not?” 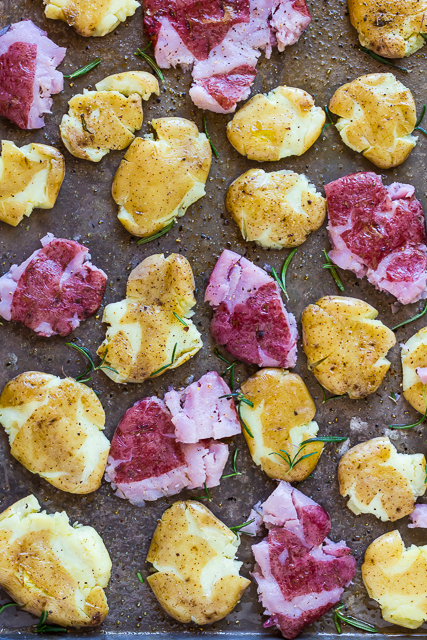 The “why not” from the past has always had an easy enough answer. White potatoes have always been the enemy in the form of chips (gloriously crunchy potato chips!) and fries (gloriously crispy waffle fries!). It’s not the potato’s fault that I haven’t ever been able to control myself around them after they’ve made a trip through a giant vat of frying oil.

So now I – we – eat potatoes, but minus the vat of boiling oil. 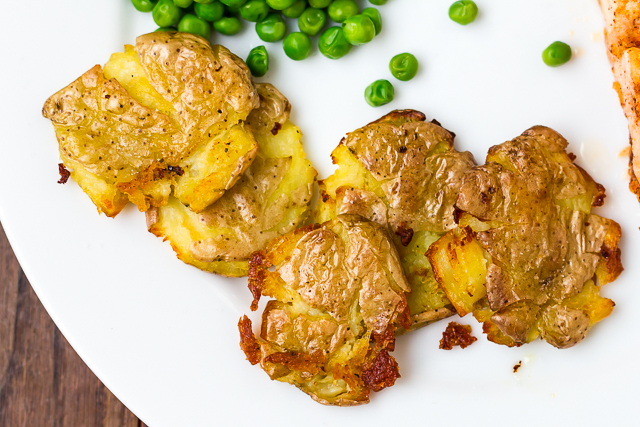 I bought a bag of fingerling potatoes. I boiled them. I smashed them with Landry (she calls them “Splat Potatoes”) because nothing delights a 4-year-old than getting to whack the heck out of something with the poultry mallet from her play kitchen without me yelling, “We don’t hammer anything but play-doh!”

And then I high-heat roasted them on a pan with some olive oil, black pepper, and rosemary until they were crispy.

While Landry declared them to be “just like Chick-fil-A but without any holes,” they actually fall somewhere in between an oven-baked fry and a tiny baked potato. Light crisp on the outside, soft and baked potato-like in the middle.

They’re a delicious starch side dish all on their own. But go ahead, top it with a dollop of greek yogurt and a crumble of bacon 🙂 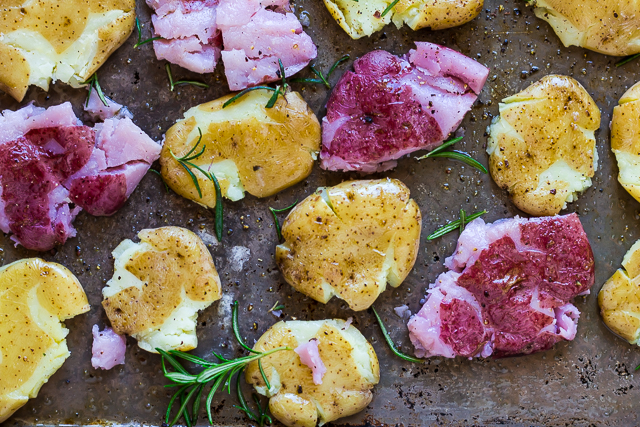 I will say that the ~50 minutes it took me to make them meant that it would be difficult to squeeze these in on a busy weeknight. So that led me down two paths:
1) I made a larger batch with the purpose of having leftovers but we instantly found that day 2 potatoes aren’t nearly as good as day 1 potatoes.
2) I split the preparation over 2 days – boil and drain the potatoes while I was making something else for dinner and then toss them in the fridge during kitchen clean-up. Pick up the process of splat-and-roast on day 2, 3, and beyond.

The latter has been a huge time-saver. I can splat a dozen or so, roast, and then suddenly I’m looking at a 25-minute side dish, which is well within my “45-minute weeknight dinner” rule. 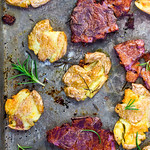