No, it’s not some crazy new diet thing – although I do consider myself somewhat of a professional dieter 😉 This, we’re calling it “Project Kidney.”

Almost two years ago, my mom got sick. Really sick, really fast. Mom’s kidneys failed and now she is on the wait list for a donor kidney. I will try to contain my rage when I think of how much of this all could have been avoided if any one had just ordered a basic urine test… but I can’t change the past.

What I can do? Try to donate my “extra” kidney. I’ve spent the last eight weeks in MVM (Major Veggie Mode [salute]) to shed an extra 19lbs that the caseworker said I needed to lose before compatibility testing. That’s why, between Instagram and here, you’ve seen zoodles and meatless pizzas and 6000 ways to make cauliflower and references to cheat meals and almost zero references to margaritas.

And first thing Monday morning, I get to call the transplant center to tell them that I hit my goal weight and I’m ready to test for compatibility. Squeeeeee!

But enough talk of urinary tracts – this is a food blog after all, not a pee blog – so let’s talk about eggplant! Remember this?

That eggplant “tree” is now a foot taller and, again, it’s loaded with just as many fruit. We’ve eaten a lot of eggplant this summer – I probably have four more recipes in the backlog – and I have to say that turning eggplant into “pasta” is one of the better Not-Parmesan things I’ve made. Besides pizza. (Man, that pizza is amazing.) 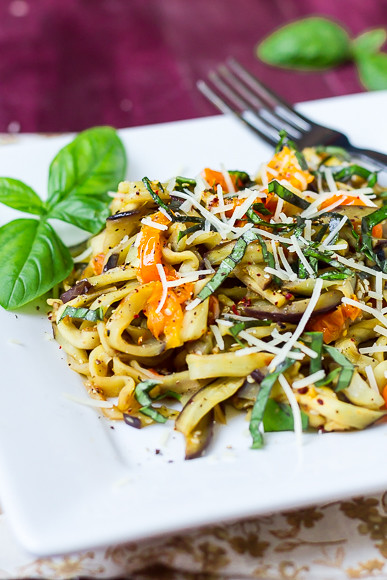 The eggplant is thinly sliced, salted to remove the excess water (and the bitter taste), and then cut into strips before being sauteed with garlic, crushed red pepper, and oil. It’s like pasta, only, you know – it’s not pasta.

And since I am still in Major Veggie Mode and will be for the forseeable future because why stop the momentum now, I skimped on the fat and omitted the heavy cream from the original recipe. But if you’ve got the calories to burn and the ability to burn those calories, you can only make the dish better by using it. 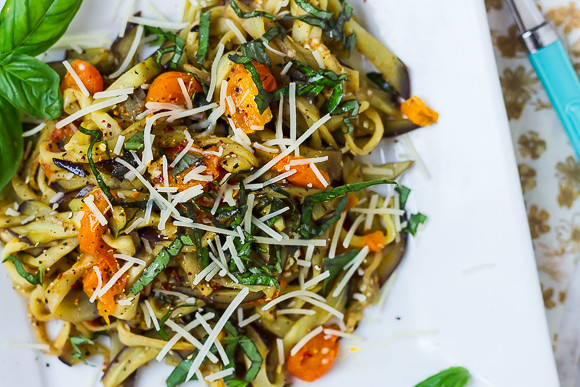 Eggplant "Noodles" with Tomatoes and Basil 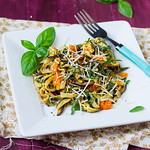 A summery "pasta" dish made with eggplant "noodles."