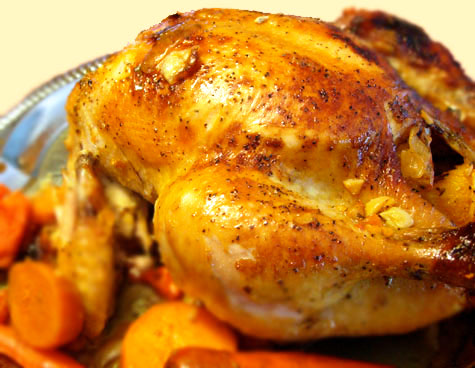 I hosted Easter dinner for the first time this year since my parents were staying in town – my father recently had surgery and it was below freezing at my sister’s house so an Easter egg hunt in Dallas for my niece and nephew was out of the question.

Ham was the traditional Easter dinner in my home growing up but my husband and I aren’t big fans of ham – cold cut, fresh, honey-baked or other. It might be the “pork thing” – I get a little weirded-out about it sometimes… one too many episodes of House, I suppose.

Mom tells a cute story: I invited my parents over for dinner after deciding it was time for them to meet Jason. Before they left their house to come over, Dad asked Mom, “She’s probably making something weird – should I eat first?” Weird. Hmmph.

So this year I had the task of making a menu that Dad would eat, that Jason would eat, and that wouldn’t disregard too much tradition for our dinner on Saturday. Thank the heavens for chicken!

I have never roasted a whole chicken before, roasting an entire chicken for two people seems a little wasteful but roasting a chicken for four – now that I’ll do! I used Giada de Laurentiis’ recipe for Garlic and Citrus Roasted Chicken (found in Giada’s Family Dinners); it looked pretty in the cookbook and I’m a sucker for a pretty picture.

The chicken is stuffed with oranges, lemons and an entire head of garlic and basted with lemon and orange juices and fresh oregano. The subtle citrus flavors were perfect for such an odd day – the gorgeous southeast Texas spring apparently took a late Spring Break and left us 40 degrees colder with weather reminiscent more of early January than April.

Recipe notes: I roasted the chicken in a 5 1/2-qt dutch oven and set it on top of 5 peeled carrots, 1/4 an onion, and a medium sweet potato cut into large chunks in the pan. My large stainless steel roasting pan would have dwarfed the bird and caused all my wonderful drippings to quickly evaporate. The pan sauce is terrific!