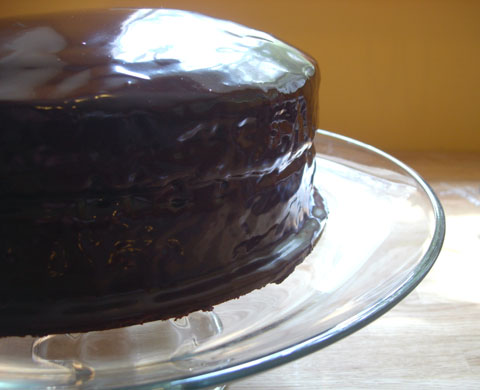 Have you ever arrived to a party, food in hand, and had a “Homer moment?” You know, where you have to stifle an internal, “D’oh!” and then have to decide whether or not to hide your plate of baked goodies in one of the hostess’ cabinets? It usually happens innocently enough, like when you show up with a plate of peanut brittle only to realize that half the crowd has a severe nut allergy. Then there are those far more obvious moments, like today.

My sisters birthday sneaked by with little fan fare while most of the family was on vacation in early September. To surprise her, I baked her a separate birthday cake in her favorite dessert flavor (or at least her favorite childhood Dairy Queen Blizzard flavor, chocolate-covered cherries) to turn my mom’s birthday party into a double birthday party.

With much love, a gigantic mess, and more cursing than I care to admit, I turned a pile of raw ingredients into a rich, decadent Tipsy Chocolate-Covered Cherry Cake for my sister’s birthday – a rich chocolate cake baked with drunken cherries, filled with Kirsch-flavored buttercream, and smothered in chocolate ganache. Decadent is right!

I show up, beautiful cake in hand, and proudly hand over the boozy confection coated in glassy-smooth ganache to my sister amid a small chorus of ooohs and aaahs. My 7-months pregnant sister. [Homer moment goes here] I then have to quietly explain to her how I’ve put more than a half cup of booze into her birthday cake.

They say it’s the thought that counts but I obviously didn’t think 🙂 The cake went over well even though my sister enjoyed most of it from the sidelines.

Chocolate Covered Cherries Cake, adapted from Chocolatier Magazine
A tasty treat for sure. The creamy frosting is far superior to the quickie butter-and-confectioner’s sugar recipe that I normally use. The recipe looks a bit long but don’t let that discourage you. Most of the items are staples – the only things I didn’t have on hand were the Kirsch (Kirchwasser) and cherries.

A wonderfully rich chocolate cake studded with cherries and topped with meringue buttercream and ganache.