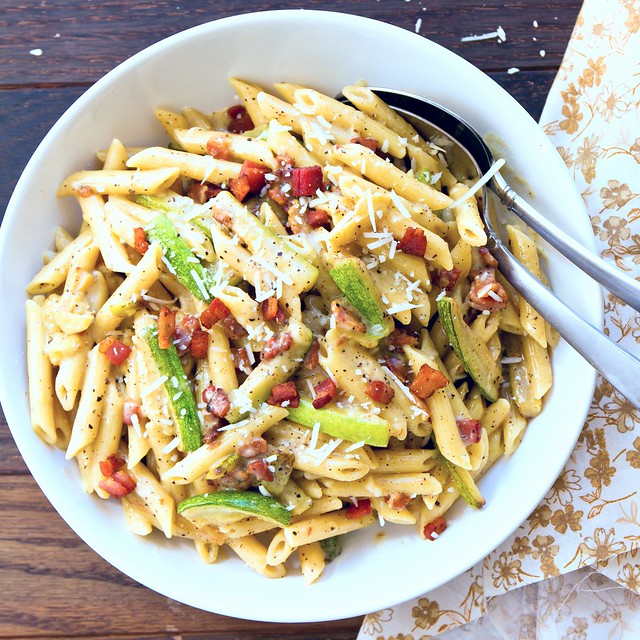 I know we’re not the only ones who became completely enamored by the idea of growing our own produce. With the vision of walking into the backyard, sun shining & birds chirping, with a pair of scissors to snip greens, tomatoes, and herbs for a quick lunch salad. And to think, I didn’t think two plants would be enough!

If you forced me to come up with a single word to describe our gardening experience thus far, I could only say “rewarding.” And I still would be selling it short.

What’s not short? The zucchini. From the crook of my elbow to the tip of my middle finger is 14.975268 inches. And the smallest zucchini in our fridge right now is about an inch shy of that. I knew we were in trouble two weeks ago when we grew bored of grilled zucchini planks so we’re trying to be a little more creative when it comes to preparing zucchini. Creative enough to make me happy while still aiming low enough as to not freak out the less adventurous eater in the house. It’s a fine line to walk. We usually all win if we happen to end up on the side that has pasta.

In the vast bookmarked recipe file I keep in my head, the one that has long-since taken over the area where I used to store my ATM PIN number and the place where I left my phone and car keys, I’ve had an idea from Jamie Oliver tucked away for just such an occasion: Squash Carbonara. He whipped up a pot of Fettuccine Carbonara and threw in some squash. We took our very favorite carbonara and paired it with one of the baseball bat-sized zucchini from the garden. We replaced half of the pasta with zucchini. This is a great, great way to healthify dinner, lightening the dish, increasing fiber, and reducing the carbs. Everything gets a wonderful coating of the velvety smooth sauce – that’s cream free! 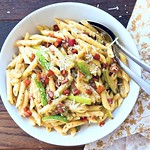 A deceptively healthier carbonara, replacing half of the pasta with zucchini.