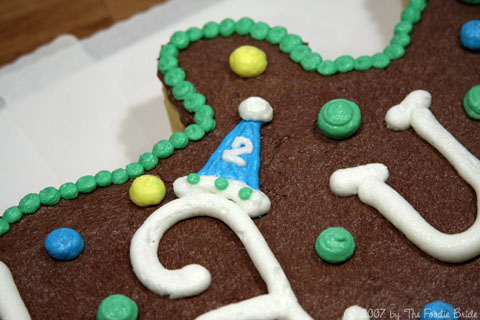 What kind of birthday gift do you get for the boy who has everything?

You pick up the remote control to check the score of the Colts game and he yells, “MINE!” before tearing the remote out of your hands.

You get halfway through typing a reminder into your Blackberry and he shouts, “MINE!” as he disappears down the hall with your phone.

You pick up his long-forgotten, sticky lolly-pop off of the fuzzy carpet and he screams, “MINE!” as he lunges for your face. “Dude, you can haaave it,” you think as you fork over the lint-pop (::shudder::) wondering how old he’ll be before he understands that the 5-second rule does not apply to wet food.

So what do you get your possessions-blessed nephew on his second birthday? If you’re me, you cop-out, donate the cake for the party, and call it even 🙂

“I don’t care – whatever kind of cake you want to do. Just no pink and no princess-anything. He’s a boy, you know.” What more creative leeway could my sister have given me! It was the perfect opportunity to try something I haven’t done before – a cupcake cake. 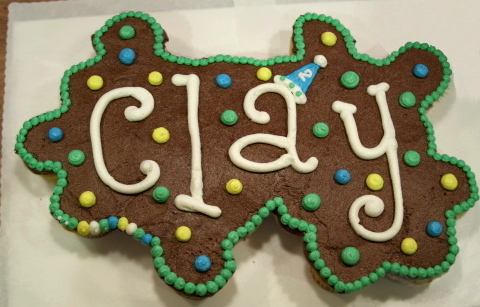 1. Use a scoop to fill the baking cups. I used a standard cake recipe which yielded exactly 24 equal-sized cupcakes using a No 12 scoop. Every cupcake was the exact same size and made a fabulously level surface that was easy to frost.

2. Cover a half-sheet (13×19-ish) cake board covered with the paper of your choice or foil. If using paper, use a brush or the tip of your finger to dot the surface of the board with corn syrup to keep the paper in place (the corners and a few dots on the center-line of the board will suffice).

3. Arrange the cupcakes in the shape of your choice, in this case it was a retro-ish free-form cake to inspired by party napkins. The cupcakes should be as close together as possible. If your cupcake cake will be traveling, use this opportunity to dot the bottom of the cupcakes around the perimeter of the cake with corn syrup to keep the cake from shifting in-transit. (I took a picture of the cake and then picked up one cupcake at a time so I wouldn’t forget where each cake went.) 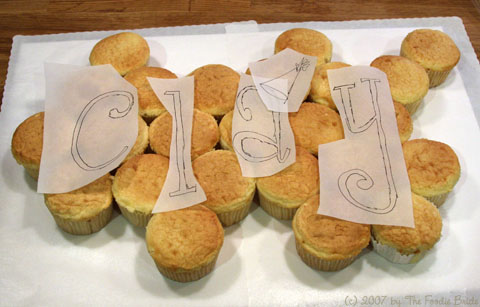 My nephew’s entire face lit up when he was handed the cupcake without a single utensil in sight. You could read his face, “Are you serious?!” When asked, “Can you thank Aunt Shawnda for making the cake?” he responded, “Chake OOoh.” 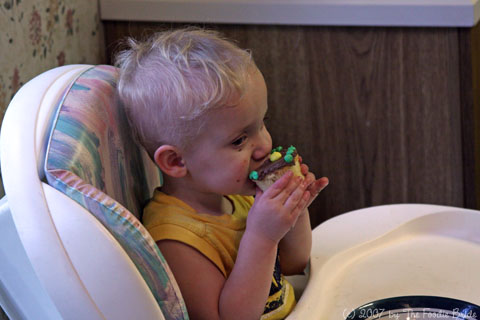