If you’re anything like me, you have more cookbooks than shoes, purses, and favorite jeans put together. If you’re anything like me, you don’t pull those cookbooks off the shelf nearly enough. I could spend Mondays with Martha, Thursdays with Tish, Fridays with Faulkner, and Saturdays with Sherry, and still barely put a dent in my collection. (I’d probably take Wednesdays off – I don’t have a cookbook authored by a “W” and plus, we have a standing agreement for one “normal” pizza night a week.) Laurie’s new baking group, Tuesdays with Dorie, was created to work through Dorie Greenspan’s Baking From My Home to Yours, one recipe a week. Baking is in the top 5 of my baking bibles. Each week, a member selects a recipe. The Doristas have a week to cake & bake before the reveal each – you guessed it – Tuesday.

This week’s recipe is Brown Sugar-Apple Cheesecake. Unless they’re going to be coated in three layers of chocolate and caramel, apples don’t get much shopping list time around here. The cheesecake was pretty good but I think I enjoyed eating the leftover caramelized apples more than the cheesecake 🙂 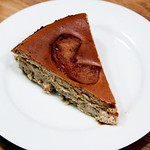 Baking From My Home to Yours, by Dorie Greenspan