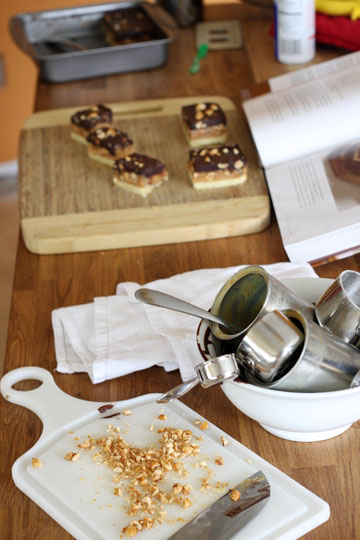 The recipe for this week’s edition of Tuesdays with Dorie was selected by Erin of Dinner & Dessert. Erin selected Snickery Squares, a confection that promised to pay gourmet homage to my favorite candy bar, the Snickers. 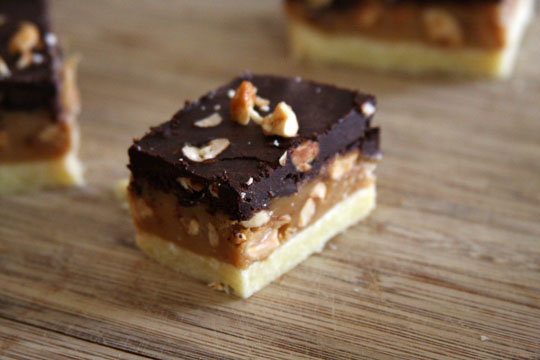 Judging from the mess in my kitchen, you’d swear that it was Thanksgiving and not simply March 1st. This was, by far, one of the messiest things I’ve made in a long time. And I don’t mean just for its size as an 8×8 dessert. The mess in my kitchen rivaled a frosted and decorated tiered cake or a holiday bakeathon 🙂 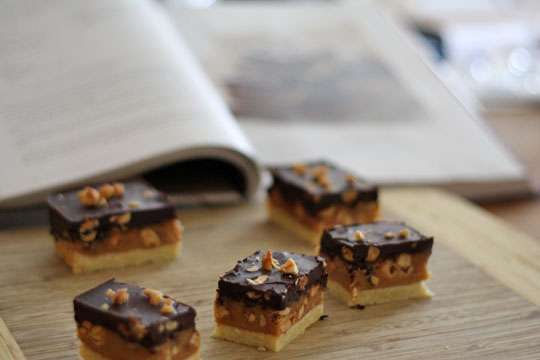 My husband and our friends really dug the Snickery Squares. I’d make them again. Some of my thoughts… I made my own dulce de leche using a method that has yet to provide timely results. I haven’t found any method yet that produces the results I’m looking for. I wished I’d had enough time to let the dulce cook longer but the Pastry Queen’s estimate of having good dulce in one hour seems to be wishful thinking, even after two hours. 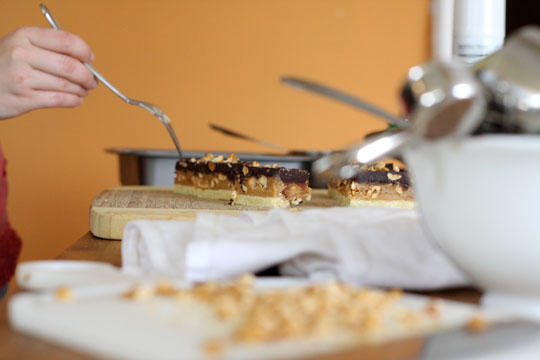 There was too much chocolate. Write that down because you might never hear me say this again. I’m actually a little ashamed to even admit it 🙂 I considered swapping out the bittersweet for semisweet because I knew a near half-pound of bittersweet chocolate would overpower the squares. I didn’t. And it did.

Not much of my slaving-over-the-cooktop dulce could be appreciated. To enjoy the simple shortbread crust or the candied peanut-filled dulce layer, you had to pick off the chocolate – an unusual step for me when enjoying dessert. Next time, I’ll either cut the amount of chocolate in half or go with a lower % chocolate. And it obviously wasn’t a deal breaker – there were no other complaints about the 1/4-inch slab of chocolate sitting on top.

The candied peanuts make this recipe. They also make a fantastic snack while you’re waiting on dulce to cook.

Preheat oven to 350F. Butter a 8 inch square pan and put it on a baking sheet.

To Make the Dulce de Leche
Remove the wrappers from the cans of condensed milk. Puncture the top of the cans with one or two small holes (or just slightly pull the top back of cans with the removable tops) and place in a large pot of water. The water should come up 2/3 the way of the can (add water to the pot as necessary to maintain the water level). Simmer the cans for about 2.5 hours, or until the milk bubbling out of the can is a rich caramel color. Remove the cans from water and pour the dulce de leche into a bowl, whisking until smooth.

To Make the Crust
Toss the flour, sugar, powdered sugar and salt into a food processor and pulse a few times to combine. Toss in the pieces of cold butter and pulse about 12 times, until the mixture looks like coarse meal. Pour the yolk over the ingredients and pulse until the dough forms clumps and curds-stop before the dough comes together in a ball.

Turn the dough into the buttered pan and gently press it evenly across the bottom of the pan. Prick the dough with a fork and slide the sheet into the oven. Bake the crust for 15-20 minutes, or until it takes on just a little color around the edges. Transfer the pan to a rack and cool to room temperature before filling.

To Make the Filling
Have a parchment or silicone mat-lined baking sheet at the ready, as well as a long-handled wooden spoon and a medium heavy bottomed saucepan. Put the sugar and water in the saucepan and cook over medium-high heat, stirring, until the sugar dissolves. Keeping the heat fairly high, continue to cook the sugar, without stirring, until it just starts to color. 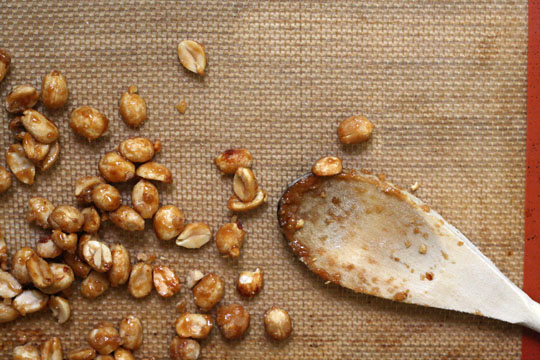 Toss the peanuts and immediately start stirring. Keep stirring, to coat the peanuts with sugar. Within a few minutes, they will be covered with sugar and turn white – keep stirring until the sugar turns back into caramel. When the peanuts are coated with a nice deep amber caramel, remove the pan from the heat and turn the nuts out onto the baking sheet, using the wooden spoon to spread them out as best you can. Cool the nuts to room temperature.

When they are cool enough to handle, separate the nuts or break them into small pieces. Divide the nuts in half. Keep half of the nuts whole or in biggish pieces for the filling, and roughly chop the other half for the topping. Spread half the dulce de leche over the shortbread base, sprinkle over the whole candied nuts, and then spread the other half of dulce evenly in the pan. (My dulce was still very hot when I assembled the squares so it flowed and spread very easily.)

To Make the Topping
Melt the chocolate in a heatproof bowl set over a saucepan of barely simmering water. Remove chocolate from the heat and gently stir in the butter, stirring until it is fully blended into the chocolate. Pour the chocolate over the dulce de leche, smoothing it with an offset spatula, then sprinkle over the rest of the peanuts. Slide the pan into the fridge to set the topping, about 20 minutes; if you’d like to serve the squares cold, keep them refrigerated for at least 3 hours before cutting. Cut into 16 squares. Because my dulce was hot, it took quite a while for my chocolate to set in the fridge. We cut the squares with a hot, dry knife after about two hours.

Yields: 16 2-in squares
Source: Adapted from Baking, From My Home to Yours by Dorie Greenspan (2006)