I’ve been humming the theme song to Transformers all week long. I don’t remember all the words – after all, it has been 20 years since I watched the cartoon regularly on Sunday mornings before church (or if it was football season, before the Oilers game came on).

My brother loved, loved, loved Transformers when he was little. And Teenage Mutant Ninja Turtles. And The Thundercats. And GI Joe. He might have been out-numbered 3:1, but there was no room for Jem and The Holograms, Care Bears, or Rainbow Brite on our TV because the baby of the family was a boy. What’s a house full of girls to do? 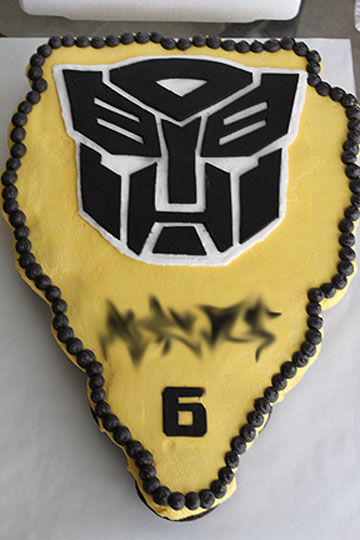 One of the challenges of deeply colored frosting is that you often require so much coloring agent, that it alters the taste of the final product. And it almost never alters it in a good way. Black is toughy but I’ve found that Americolor products work really well (thanks, Mom!)

To make black fondant for this Transformers cupcake cake (in “Bumblebee”), I started with a chocolate marshmallow recipe – a recipe that David Lebovitz gave us in a recent cooking class. I then used those marshmallows in a marshmallow fondant recipe. The result was a true black fondant with a cocoa-y flavor and a faint Oreo-like aftertaste. 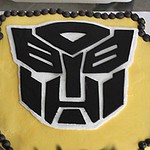