I don’t like Miracle Whip. I am the real mayo-lovin’ black sheep in a fold of Miracle Whip lovers.

It wasn’t always like that, though. There was no Hellmann’s in my house growing up – we were a completely loyal Miracle Whip household. My mom would occasionally sneak in a jar of off-brand sandwich spread but only occasionally – the tantrum my dad threw over the fake Miracle Whip was so not worth the money saved! But after getting my hands on real mayo, I’ve never looked back. 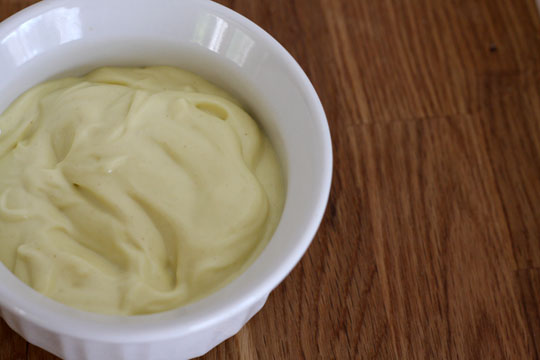 Years later, grown up and married, I find myself again alone in my love for mayonnaise. I also find myself in a predicament: I’m whipping up a topping for crostini that has to chill overnight. It’s 2am and I don’t have any mayo. But I do have Google and I’m probably getting close to the 100 cookbook mark.

So many recipes, so few hours until the sun comes up. I passed over the ‘whisk for 10 minutes’ recipes in favor of an advanced, 21st century recipe. Call me lazy but whisking for 10 minutes? It’s after 2am.

But really. If you only do it once, make a batch of homemade mayonnaise. It makes everything taste better. Brighter. Richer. Chicken salad, tuna salad, a tomato sandwich, dips and spreads. Everything.

For fantastic variation, stir in a couple of tablespoons of fresh cilantro pesto or basil pesto. Fresh rosemary is a great addition for a very unboring chicken salad.

Add the egg, lemon juice, mustard, and salt to the bowl of a food processor. Turn on and process. Slowly stream the oils into the food processor. After adding all of the oil, process another 30 seconds. Place in a covered bowl, with plastic wrap pressed onto the surface of the mayo, and refrigerate.