I promise you that I bought those tomatoes with the best of intentions. I was going to add them to the side salad we were supposed to have every night at dinner. 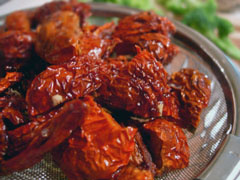 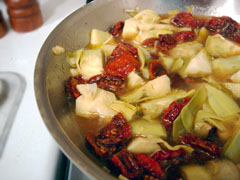 I was going to eat a side of caprese salad instead of bread on each of our Pasta Nights (we have at least 3 a week!).

I was going to eat a healthy sandwich piled high with tomatoes and veggies for lunch instead of grabbing sushi from the dining room at work. I was going to…

Wednesday night rolls around and the tomatoes were not looking so hot. They probably wouldn’t have lasted another 24 hours so I put them out of their misery and into my oven. It was 40 degrees outside. There had been no sun in sight for days, not that I would know how “sun-dried tomatoes” are actually done with the sun, or even if they are at all. An attempt at saving the tomatoes from dying in vain would be better than nothing, right?

3 sickly tomatoes and 3 hours later, I had a batch of wonderfully roasted Do-It-Yourself oven-dried tomatoes. I tossed a few of them into a small bowl of orecchiette and sprinkled some homemade ricotta on top. Heaven in a bowl!

Cut the tomatoes into small wedges and place in a bowl. I quartered the smaller tomatoes and cut the larger ones into eight wedges. However you do it, the key is to get the wedges all approximately the same width so they cook evenly.

Add enough oil to the bowl to coat the tomatoes and toss. (The amount will depend on how many tomatoes you started with.) Lay the tomatoes in a single layer on a silpat mat or coated baking sheet and sprinkle with salt.

Check on the tomatoes after the first hour of baking, and then every 30 minutes until they have caramelized and are no longer fleshy (most of the water should have been removed). Remove from oven.

Leftover tomatoes should be cooled to room temperature before refrigerating. Place the tomatoes in an air-tight bowl with enough oil to just cover the tomatoes. The tomatoes will keep for approximately a week.