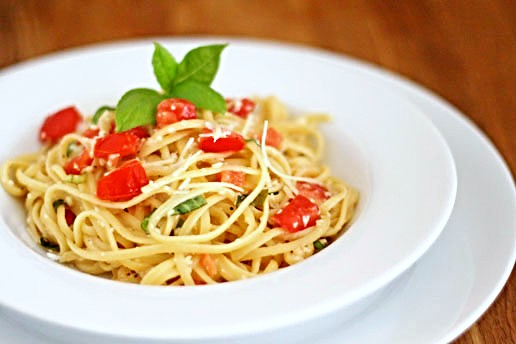 My husband is a pastavore. He can live on pasta and pasta alone. That being said, he won’t touch spaghetti. He’ll eat the same marinara sauce on any other shaped noodle but he won’t touch a spaghetti noodle. Really. Flatten that noodle out a bit and he’ll eat it, no questions asked.

I can’t pick at him too much about his spaghetti phobia. It’s definitely not my favorite noodle but I have a bit of a food phobia myself: I won’t touch corn unless it’s on the cob. The second you cut it off the cob, it becomes completely inedible unless you’ve buried in a bowl of soup, a chicken pot pie, or a muffin. On the cob = pass me the butter! Off the cob = headed straight for the garbage.

This is a super quick & easy meatless dish and it’s made with husband-approved noodle shape. We’re talking from pantry-to-table in about 20 minutes, depending on how quick a water boiler your cooktop is. We also like to swap the tomatoes and basil for crispy pancetta for a creamy, eggless carbonara pasta. We’ve actually set aside our previous favorite carbonara recipe in favor of making it this way.

Buttered Linguine with Tomatoes and Basil 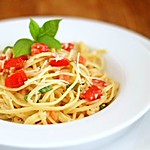 A weeknight favorite: quick and easy pasta dish with fresh tomatoes and basil.