Cookies and craft beer. That’s what Landry leaves out for Santa. The jolly old elf’s tastes sure have changed over the years!

30 years ago, his choice of treat while making the brief stop at our house was always a glass of milk and a slice of chocolate pie. I remember asking my dad why we didn’t leave cookies out like everyone else did.

“He eats cookies all night, Shiner. By the time he makes it to Texas, he’ll be hankerin’ for somethin’ different.” (Yep, my dad still says “hankerin.” And yep, I had a nickname that would end up the name of a popular beer. Go look up foreshadowing if you need to and then giggle.)

You can be sure, though, if something had prevented Santa from visiting our house, a fear we 4 kids secretly had… and all secretly had pre-pinned fault on my troublemaker sister Kristen, that chocolate pie would have never gone to waste.

Because coincidentally [wink wink], it was also my dad’s very favorite pie. We were pie people. So on Christmas Eve, before and after we visited my MeMaw & PaPa’s house to open gifts, we baked pies. And when we woke up before dawn on Christmas morning, there was always a single bite of chocolate pie left on the plate – fueling our belief in Santa that much longer.

Because no way in hell would my dad had ever left a perfectly good bite of chocolate pie behind. (I can just see that heavy-whispered argument go down between my mom and dad, as much tradition in our house as the slice of pie itself, no doubt: Don’t eat it all! Why not? Because! Because why? Because it needs to look like Santa ate it! BUT IT’S CHOCOLATE PIE!!!) The Santa of today prefers cookies and a glass of Texas beer on his brief stop in Katy, Texas. So cookies he will get. Chewy cookies studded with butterscotch chips, pecans roasted in browned butter, and a sprinkle of salt over top.

As for the beer, Santa will get a tall frosty mug (unless he decides to bring me those fancy beer glasses I’ve been wanting) of our homebrew Cousin Eddie’s Christmas Ale – it’s a strong ale flavored with oak, bourbon and vanilla bean. Although, at a whopping 9% ABV, he’ll probably have to settle for a flight glass unless he wants to stick around a while 🙂 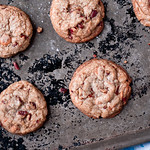