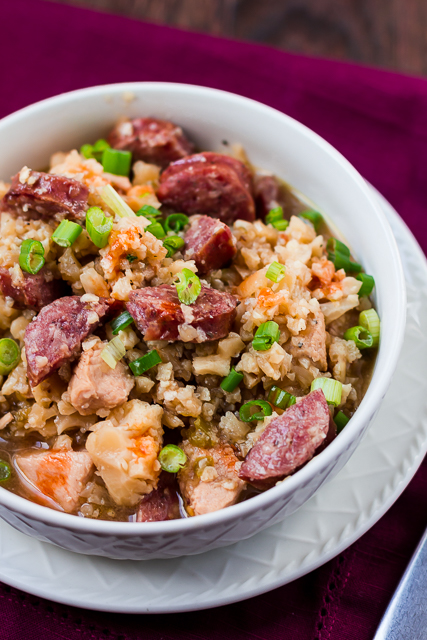 It’s not Fat Tuesday yet but don’t let that stop you. I sure as heck didn’t let it stop me from whipping up a monster pot of chicken and sausage jambalaya. I found it to be the perfect opportunity to try out cauliflower “rice” on the family.

Their verdict? Well, they did let me live to share the recipe. Soo…

Mom: MMMMmmmm
Jason: It’s a little different. And it doesn’t taste much like cauliflower. [That is a win from him.]
Landry: I NEED SOME MILK! [I’ll return my Mother of the Year trophy, stat.]

I never know where to draw the line with her. Because this is the same little girl who took snagged a serrano pepper straight off the plant and took a bite out of it and had absolutely no reaction. None. ZERO. 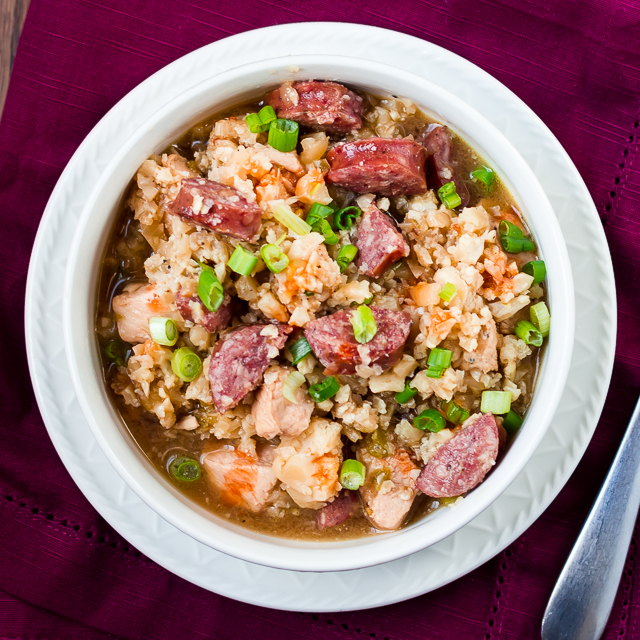 So cauliflower rice is not rice at all. It’s fresh cauliflower florets that have taken a ~15 second low-speed spin through the food processor so that the size and appearance looks rice-ish. But the flavor? All cauliflower.

I happen to adore cauliflower (Exhibits A and B. And C.). I can actually remember the first time I ever ate raw cauliflower: it was the summer after my freshman year in high school (because cauliflower didn’t come in a can), and it was served like we serve every other veggie down here in Texas: with half a squeeze bottle of ranch dressing.

Raw cauliflower can be pretty strong and cooking it will really help reign-in the flavor. And cooking it in a big pot with caramelized vegetables, sausage, chicken, garlic, and bay leaves? The cauliflower is mostly masked by the stronger flavors of the jambalaya. 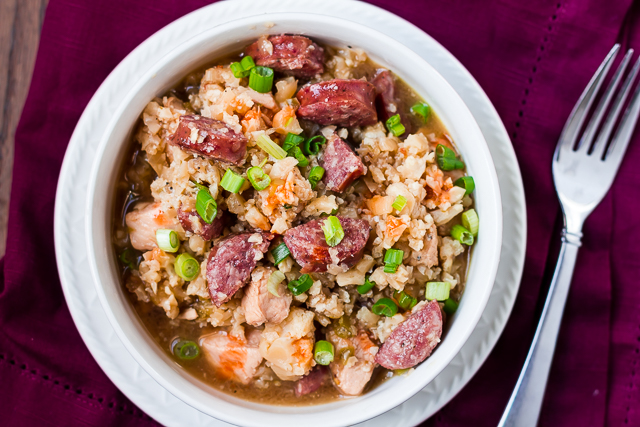 The one real difference between the original recipe and the cauliflower version is the amount of liquid you’ll use at the end of the recipe. The original recipe adds a bunch of chicken stock and water, which the rice would then absorb. With the cauliflower, you’ll only add as much chicken stock as you need to reach the consistency you’re looking for. Where I’m from, the jambalaya isn’t overly soupy so I tried to add as little as possible but as you can see, I did have some standing liquid.

Enjoy it. We sure did. It is a little different but it is every bit as delicious as a more traditional rice version. 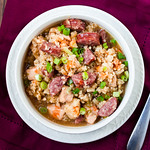 Hearty chicken and sausage jambalaya made with cauliflower "rice."