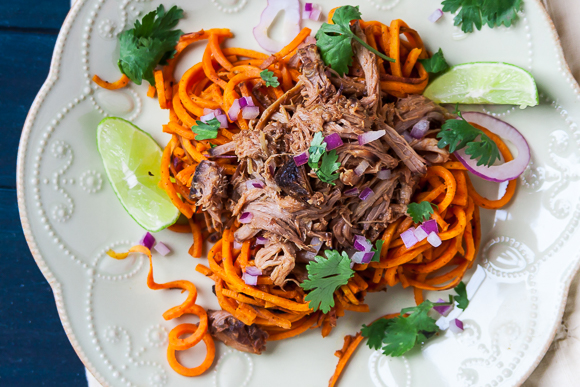 Sweet potatoes have become my second favorite thing in the world to spiralize, behind zucchini.

Previously, I’d bake several sweet potatoes for the week during meal prep on Sunday afternoon – because they take an hour in the oven, they’re almost always ruled out for cooking on a weeknight.

Maybe they’re not quite as easy as stab-with-knife-throw-in-oven, but they do only take minutes to prep and minutes to cook.

Prep work involves rinsing off the potatoes and a couple dozen cranks on the spiralizer (this is the model I have). Cooking takes 7 minutes and requires nothing more than a little olive oil, salt, pepper, chile powder, and lime. And then comes the hard part: eat them naked (the noodles, not you… but there’s no judging here) or top them with something. Anything. Nothing! 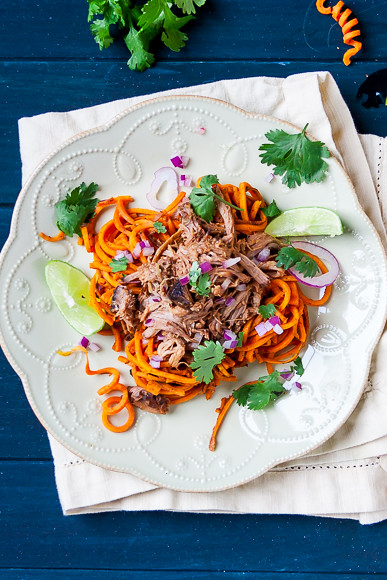 Last week at our fantasy football draft party, I put out 3 kinds of margaritas (grilled pineapple, classic, and grapefruit) and a nacho and guacamole bar. My friend Ana brought over a fabulous slow-cooker pulled pork, possibly one of the better ones I’ve ever had.

What starts out as your average pulled pork (unwrap pork butt, {snicker} throw in crockpot) gets coated with a chipotle-pineapple marinade-turned-reduction.

The tender meat is pulled and then dressed with a reduced sauce that gets a good kick from chipotle peppers, just a hint of sweetness from pineapple juice and brown sugar, and a tangy kick of lime juice squeezed over top.

The pulled pork stays fresh-from-the-crock tender and, as you can imagine, those flavors work absolutely perfectly over a bed of spiralized sweet potato noodles. 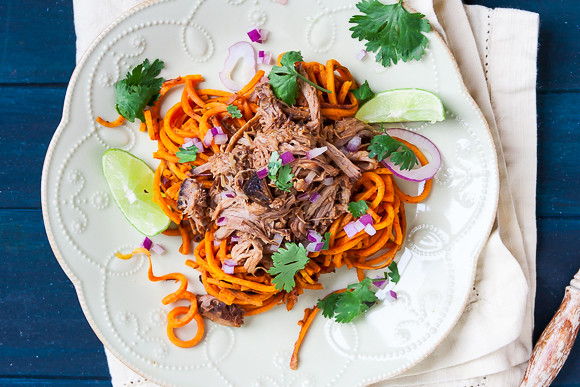 Semi-pro tip: When I make something in the slow cooker with plans to reuse the cooking liquid, I usually start it at night. (The downside is I wake up at 4am STARVING.) In the morning, I’ll transfer the meat to the fridge to deal with later and then I’ll pour the liquid into a large measuring cup and refrigerate.

When it’s time to cook dinner, all the fat in the sauce has separated and solidified into an easy-to-remove layer. I can lift it off with a fork and proceed. 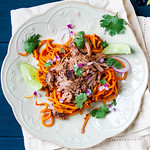 Spiralized sweet potato noodles get a kick from chipotle chili powder and lime juice. Eat them alone or turn it into a full meal by topping them with a sweet and spicy slow-cooker pulled pork.

Source: The Brewer and The Baker (Pulled Pork adapted from Slow Cooker Revolution)