What I want to cook
vs.
What my husband will eat 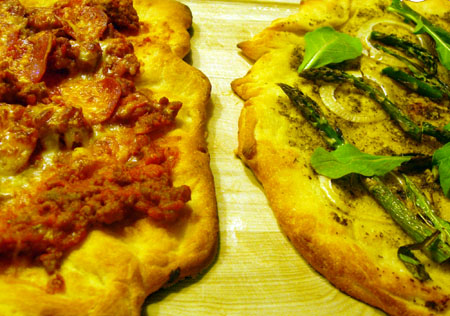 I’m not complaining – it is very fun cooking new things and slowly expanding the “What my husband will eat” list (aka, “Operation: Sneak Veggies Into His Food”) – but sometimes our tastes don’t quite line-up. He loves pizza, especially a particular brand of frozen pizza topped with pepperoni and sausage. I like a good slice, too, homemade and topped with leftovers or a whole bunch of green stuff from the veggie bin but I’d rather bust open a cookbook or a recent cooking mag and turn out something new. We usually end up with a common base dish but two different entrees.

I understand that pizza is his staple food, right behind pasta, and I would make pizza for him (us) waaaay more often if I could find a good pizza dough recipe. I have few requirements:

I’ve made refrigerated doughs, pre-cooked doughs, just-add-water boxed doughs, and several different from-scratch recipes. Some recipes called for way too much olive oil and ended up a dense mess, some were completely flavorless, and some were too similar in texture and taste to pre-sliced white sandwich bread.

I was flipping through Everyday With Rachael Ray, one of three food mags I subscribe to, and ran across a delicious-looking pizza. I had none of the pizza toppings on hand but that didn’t matter – I already had inspiration for the top of the pizza, thanks to Kalyn’s Kitchen, but I needed the bottom of the pizza before I could get started.

Preheat oven to 500 degrees. Stretch the pizza crust onto a greased baking sheet, silpat mat, or pizza stone to desired thickness and brush crust with olive oil. Bake in oven for 5-7 minutes, just until crust begins to brown. While the crust is in the oven, heat leftover pasta sauce in a saucepan. Spread pasta sauce over crust, leaving an inch around the edges. Top with pepperoni and cheese and bake 5 more minutes until cheese has melted and crust is golden brown. Remove, cut into 8 squares, and enjoy!

Preheat oven to 500 degrees. Stretch the pizza crust onto a greased baking sheet, silpat mat, or pizza stone. Spread pesto over the crust, leaving an inch around the edges. Toss chopped asparagus and onion slices with enough pesto to coat and spread toppings evenly over the crust. Brush the edges of the crust with olive oil and place into oven for 10 minutes or until crust is golden brown. Add arugula leaves and sprinkle with parmigiano-reggiano and enjoy! 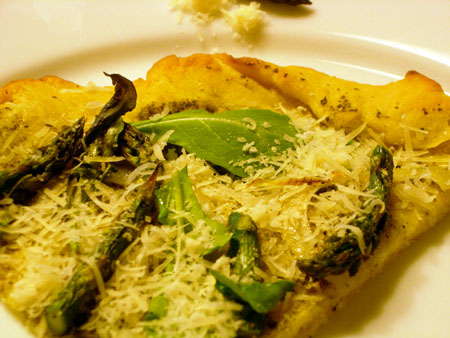