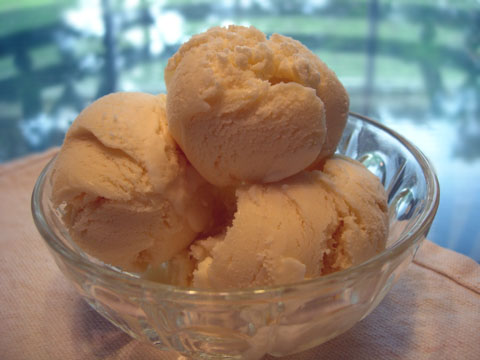 My first batch ever of homemade ice cream. Rich, velvety, and vanilla-y.

As a child, we spent lots of our summers at my grandparents’ house, in a tiny, not-even-big-enough-to-be-on-the-map northeast Texas town. We started everyday with chocolate gravy for breakfast or homemade apple butter on toast. We spent the rest of the day playing with our cousins who lived near by or “working”: gathering and shelling pecans, feeding cows and chickens, harvesting vegetables, and snapping peas.

One of the best treats of summer is homemade ice cream. Grandma makes homemade ice cream out of snow that has fallen the previous winter. Her part of the state gets a few inches early in the year so she saves it and then turns it into dessert several months later. Snow ice cream is light and airy – almost like super-fine shaved ice.

The other side of homemade ice cream, “child labor law” ice cream, was a treat to enjoy but man, was it hard work! 20 years ago, grandma’s ice cream maker had the turn-crank – that meant we all took our turn at the handle. When one child’s arm tired, it was time to switch and he/she went to the back of the line.

I decided that after eating my mom’s homemade vanilla ice cream a couple of week’s ago that I wanted an ice cream maker of my own.

With the new ice maker at home and ice cream effortlessly churning away, I headed out to the grocery store to pick up a couple items. I impulse-purchased a pound of some of the reddest, juiciest strawberries… but the strawberries are another story.