Could there be anything better than that, in any interpretation 🙂 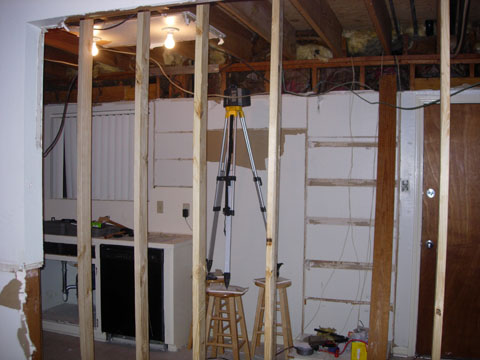 A couple of weeks ago we punched several small holes in the kitchen ceiling to see what was up there. Last weekend we removed the countertops, cabinets, and appliances and then gutted the room to the studs (with the exception of the back wall, which holds the only vertical surface on which to place hammers). This weekend was spent altering the support structure in preparation to raise the ceiling 12 inches and remove a load bearing wall – that’s the first of two temporary stud walls that you see in the mid-ground of the picture. Yaaaay for higher ceilings, handy husbands, and father-in-law architects!

Sadly, we found no piles of money or jewels hidden in the walls or ceiling. We decided against creating our own little spoof of HGTV’s “If These Walls Could Talk” because who wants to learn about a cigarette butt, a metal electrical outlet wall plate, two X-rated trading cards, and an empty box of prescription Paxil? I didn’t realize that stuff was made that long ago… must have been a more recent repair.

Our busy Saturday was highlighted by a terrible scare first thing Saturday morning. When we woke up, it was 80 degrees. Inside. The air condition appeared to be kaput. It was 88 degrees inside by noon and Seventh-Cirlce-of-Hell hot outside. But to make a long story short… Yaaaay for a $7 part (because it’s much cheaper than a $3000 new AC), my dad, and a family AC/Heating installation/repair business! Sometimes it is about who you know 🙂

We’re hoping to be back to semi normal by the end of the month!