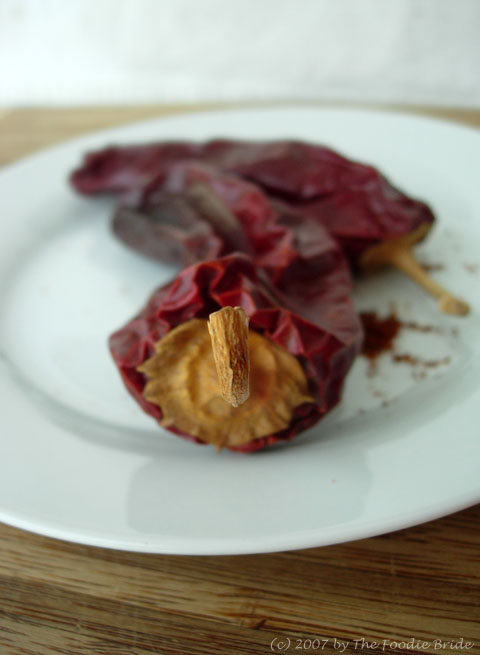 Me: Did I ever tell you that I took first place in a chili cook-off once?

Him: Yep. It’s been 4 years and I still haven’t seen that chili.

Chili is the official state dish of Texas. There are as many right ways to make chili as there are people in this state. I grew up under the “real Texas chili has no beans” school of thought but I sure wouldn’t turn my nose up at a free bowl of chili with beans (although we refer to this dish as “chili beans”).

Chili can hold its own as a meal alone but my favorite part is reinventing leftovers over the next several nights: Chili-Mac (chili and macaroni & cheese), Frito Pie (chili, Fritos, cheese, onions, and sour cream), chili & crackers, chili & crumbled corn muffins, and chili dogs. If there’s any chili left after all that, then I made too much 🙂

The first time I cooked chili that didn’t involve a can or a just-add-ground-beef packet from McCormicks, I won a chili cook-off. I kid you not. I was barely old enough to buy the beer that went into the recipe and I finished first in a field of 40-ish entries for our church’s big annual fall festival.

The judging committee was comprised of the pastor, assistant pastors, and a couple of other semi-important Baptists. After the cook-off was over, a couple of the judges were standing in front of my booth and the pastor says, “So, little lady [I cringed], tell us what your secret is.”

Standing in the church parking lot, I had a quick decision to make: I could lie but that seemed wrong considering my surroundings, albeit perhaps only slightly less wrong than the truth. I had no secret ingredient, just a secret, but I was hoping he’d be amused all the same.

I smiled at him and said, in my best perky, dumb-blonde-on-a-sugar-high voice, “A six-pack of Shiiiiner.” I made sure to drag out the “long Texas i” for dramatic effect so I’d have something else to remember that day, you know, besides getting kicked out of church. Then I held that smile for the seemingly eternal awkward silence that followed until the pastor finally broke out with a big belly laugh and said, “I’ve heard about you.” Sometimes we Baptists can be just a wee bit uptight but we’re usually good fun, all the same 🙂

The first time I cooked chili in years turned out pretty darn well – spicy, but good. Good chili is just chili to me – I rarely come across an innovative recipe or one that makes me go “Wow!” (unless it’s loaded with habaneros). The cooking world is a different place now but I might still toss a vote at this recipe.

*Unless there’s a sale on tri-tip, boneless sirloin, or a good roast, I usually just grab the “chili pack.” I never use ground beef.

**Plus more to adjust the taste/heat while cooking.

Place ancho chiles in a 350 degree oven for 10 minutes, until crisp. Let cool and then remove stems and seeds (You could probably remove them before roasting, too). Run the peppers through the food processor (You can also use a spice grinder, if you have one… I don’t. I added 1/2 cup or so of the beef stock to get things moving around enough inside the food processor to obliterate the peppers).

Cook the bacon over medium-high in a dutch oven (I used 4.5 qt dutch oven) until crispy. Remove the bacon, leaving the bacon drippings behind. Reserve bacon for another use (I at a BLT for lunch after I started the chili). Turn heat to high.

Add the beef and and cook until nicely seared on the outside (I cooked the beef in two batches, allowing the pan to heat a minute or two between batches). Remove beef using a slotted spoon and place in a bowl. Add the onions, garlic, and red pepper flakes to the pot and stir until onions are soft. Deglaze the pan with 1/4 -1/2 cup Ziegen, taking care to scrape up all the browned bits from the bottom and sides of the pan. Continue cooking until most of the beer has cooked away, leaving the onions and garlic syrupy.

Add the beef (and any accumulated juices) back to the pan and stir in beef stock, 1/2 cup Ziegen, tomato sauce, chili powder, ground ancho chile mixture, paprika, cumin, Mexican Oregano, and chocolate. Bring to boil and reduce heat to low. Cover and simmer for 30 minutes.

Taste for heat and flavor. I usually add a couple more Tbsp of chili powder and a dash of whatever else I feel it needs (ground cayenne, salt, etc). Simmer uncovered for 1 1/2 hours, stirring occasionally and tasting for heat and flavor. Whisk masa harina with remaining Ziegen and stir into chili. Simmer for 30 additional minutes. Serve with corn muffins and the toppings of your choice – we like sour cream, chopped cilantro, chopped yellow onions, and shredded cheddar.

More notes (like you need anymore!): Ounce for ounce as far as spices go, I probably never include the exact same amount twice – that’s the fun part of the dish. Heat, flavor, chiles, and spices – it’s all to-taste each time. I imagine this recipe isn’t all that different from the next chili recipe. It was born out of surveying a few family members and co-workers on what they felt made a really good chili and then standing over my teeny apartment stove playing with the spices and heat. It’s funny – a couple even shared their “secret ingredients” with me. On both occasions, it was chocolate. How funny 🙂